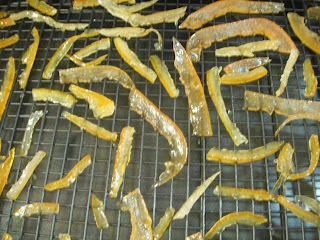 I like candied peel but find it usually contains sulphites.  These don’t trouble me, but while I am making food for people who can’t eat gluten it seems sensible to avoid as many of the usual problem food components as possible.
I am about to make a batch of mince pies for a local farm shop.  I could just use bought mincemeat, or make it without the peel, but the recipe for candied peel looked very easy though it needed quite a long time for all the stages.
I started by buying three lemons, four oranges and a grapefruit.  I don’t remember why that particular number, but I don’t think it matters as the recipes I looked at all called for different proportions of the citrus fruits.  I scrubbed them, then slit the peel with a sharp knife and removed the peel.  Some recipes say juice the fruit first, but then later on they say scrape the membrane from the softened peel, and that sounds too much of an effort.
I slivered the peel then cooked it in water until soft. Just add enough water to cover the peel and top up as necessary.  Stir occasionally to avoid sticking and burning. 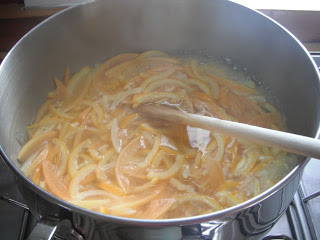 Some recipes suggest boiling then draining, reboiling in fresh water, draining, reboiling in order to cut the bitterness.  I decided not to do this as I like bitter marmalade and I want the peel primarily as an ingredient in cooking.  Actually, having finished the peel I don’t think I would want to reduce the lovely bitterness even if I was going to eat these plain or dipped in chocolate.  When making marmalade I have softened the peel in pressure cookers and in the microwave – use whatever method you find easiest – all you are doing is getting the peel to the point where you can squish it easily between your fingers.
Drain the peel, reserving the liquid.  I plan to make citrus Turkish delight with this liquid as it seems a shame to waste all that flavour.  I’ll post information about that when I do it as well.
I ended up with 650g of cooked peel (I forgot to weigh it before I started).  I added the same amount of sugar to 300g of water, which gave enough syrup to just cover the fruit.  Add the fruit and cook gently until almost all of the syrup is absorbed.  I added a bit more sugar, totalling 800g, as I thought the peel was too bitter, and the more sugar it has the better it should keep. 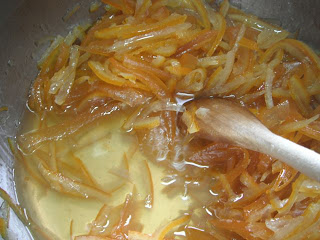 Stir occasionally.  Check every fifteen minutes or so to make sure it isn’t sticking or burning. This could take up to a couple of hours on a very low heat. 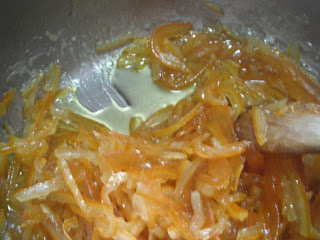 Spread the peel out on racks and leave to dry somewhere warm.  I put these in my oven with just the light on, and every now and then put the oven on its lowest setting – it’s a fan oven, to drive out the moist air and add a little bit of extra warmth.  Slow drying rather than cooking is what is being aimed for.  In the summer I dried glace cherries on a stack of cooling racks covered in a tablecloth to allow air circulation and keep flies and dust off. That worked fine too. 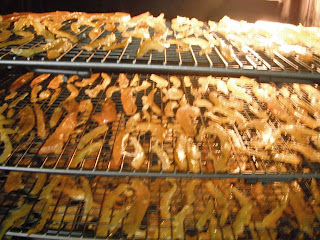 These should be dry enough to make the mincemeat tomorrow with some of the peel.  The rest I will store in airtight containers until needed.
Ingredients
Citrus fruit – peel including the white pith     650g once softened
Water to keep covered for first softening boil

Syrup made from:
Drying racks.