Friday morning arrived and so all the cupcakes were retrieved from the freezer, a giant bowl of white chocolate icing made, and the assembly begun.

Great tip – trim your giant cupcake before freezing. It is very hard to cut a smooth slice of cake when it is hard. I gradually nibbled away at the surplus cake from the four cakes that would end up being the giant cutting cupcake, but it was hard and exasperating work. Of course if I had just left it to defrost it would have been easier, but I was under a time pressure as we had to leave for a general family meal at the hotel in the evening. If you put the cakes back in the tins you can use the surface of the tin as the guide to get a straight line – though not on the large flat cake I had made to act as the base. 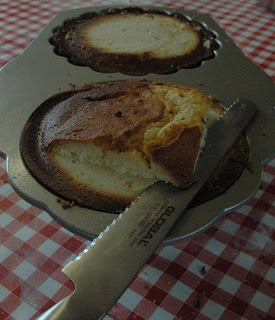 I started with icing the little cupcakes, using a piping bag to get a swirl of icing on each one. I then put the cakes in the cupcake boxes, each of which took twenty-five cakes, and then put the flowers on top. 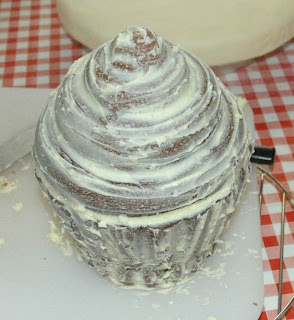 I then coloured readymade fondant icing and rolled it out thin, and with a bit of an effort got the top and bottom covered. I had made ivory coloured fondant shapes to act as the cupcake wrap to match the small cupcakes, but the first one broke as soon as I tried to put it on, so I hurriedly cut lots of little ivory flowers to stick onto the lilac fondant instead. Waiting for them to harden enough to press gently in place was difficult, but with some spares so that wasting a few didn’t matter I did get the whole lower cake covered.

The little cupcakes had vaguely realistic flowers on but I wanted the silliness of the giant cupcake to be emphasised and had made big flat flowers. I then stuck these all over the cake to look like the sprinkles people put on cupcakes. I had some glittery cake decoration which I put in some of the gaps. As the cake cutting was to be in the evening I thought a bit of glimmer would be good. 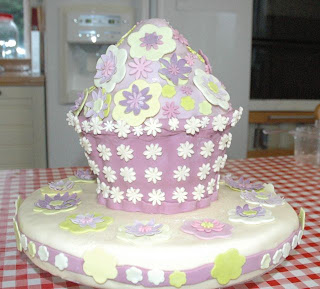 We piled everything in the car and drove very carefully to the hotel. The giant cupcake wouldn’t fit in any of the boxes we had, so I was a bit anxious but it survived the trip. At the other end the hotel manager at first thought we would bring ‘the cake’ into reception, but when we explained that there were five large boxes of cupcakes, a giant and quite heavy cupcake and a box of flowers for the top he said he would meet us at the car with the kitchen staff. I would have liked to have a video of what happened next. As we waited at the car the kitchen door open and a stream of kitchen staff in their uniforms filed out. We piled everything onto their outstretched arms and off they went.

I had thought that I would be able to assemble the cake during the morning while nothing was happening. However, the wedding ceremony was to take place in the same room as the meal, so nothing could be done until after the formal ceremony had finished. I was worried about having the time to do all the necessary work, but I was told that the staff would sort everything out. To speed things up we assembles the cupcake wrappers in advance. Sara and Rod chipped in, and we got the whole lot done in about twenty minutes. 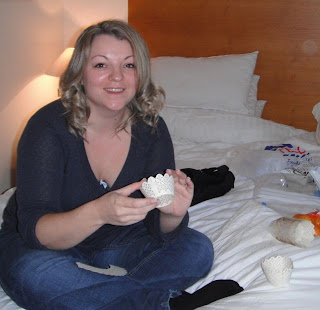 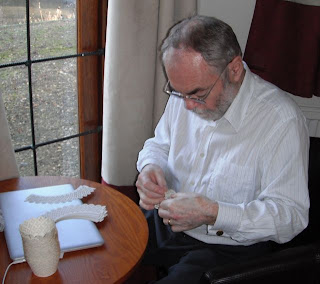 I gave the cupcake wraps to the hotel staff and went off to help with the complicated dressing activities of the principal participants.
Posted by Lois Parker at 14:04