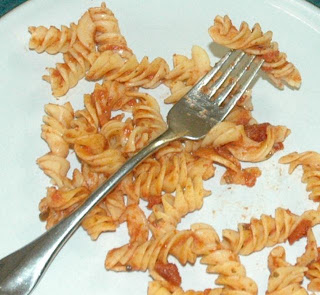 I bought some Le Veneziane pasta from lavidafood.com as it had a recommendation in the Coeliac Society magazine Crossed Grain. I intended to do full blind testings against my current favourite, Tesco Organic gluten free, but haven’t had the time what with all the wedding preparations.
I cooked a packet of their Fusilli yesterday and stirred in a bottle of Seeds of Change pasta sauce for a quick lunch with salad. The pasta had a good texture, being smooth and firm. It held its shape well, didn’t crumble, and didn’t go granular in the mouth. I put the left-overs in some tubs to see how they behaved. In the evening the cold pasta was still good. It had held its shape well and still felt good in the mouth. It hadn’t developed any weird flavours or textures.
The next day I tested a third pot cold and reheated one until steaming in the microwave. Both samples retained their shape. However, the cold one fell apart in the mouth in slightly brittle lumps. On this basis I would suggest that the pasta would be ok as a cold salad the same day it was made but you shouldn’t expect to be able to eat it with much pleasure the next day. It might seem a slightly strange thing to be testing for, but the lack of ‘keeping’ foods for packed lunches and picnics is one of the main complaints of the gluten-intolerant eater.
The sample I reheated in the microwave was softer than it had been when first made but it held its shape well enough to be picked up whole on the fork, and felt smooth and pleasant in the mouth. On the basis of this first test I think that this pasta will do fine as a reheated supper or midnight snack.
.......
a couple of weeks later- took a small tub of the frozen left over pasta out of the freezer and tipped it into a frying pan with diced cooked turkey, peppered salami (again left-overs frozen as short shelf-life once opened) and some chilli jam (made one year when had a glut of chillies and garlic).  Tolerant Taster, whose lunch this was, said it was good. The pasta was soft but not mushy and didn't go to odd granules in the mouth.
Posted by Lois Parker at 09:15