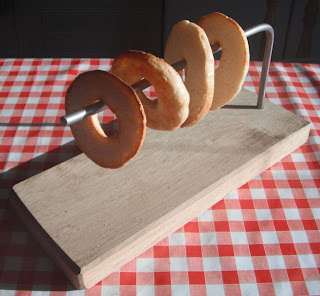 As a household we generally only eat bagels as our bread, because the gluten free dough works best as bagels. I used to make traditional sour-dough bread regularly, and at one stage had three different sour-dough cultures. One was the San Francisco culture, which I used most often, and the other two were Italian. One of these produced a cheese flavoured bread without adding any dairy products at all.
However, as I gave up gluten Feb 2008 I worked to find a recipe that gave some of the pleasure of a proper sourdough bread. I wasn't too bothered about feeding myself because just feeling so much better was reward enough for me. To keep the house as gluten free as possible I needed to find a bread dough that would work with marmalade and cheese and be good enough for pizzas so that I wouldn't be tempted to cook with ordinary flour for Rod, who has enough to put up with being reminded constantly to keep gluten out of my way and doesn't need culinary deprivation on top of emotional abuse.
My bagel recipe is reliable and I now make it regularly. I was shocked yesterday to realise that, after a lunch of bagels and salad, that we were a bagel-free household. The focus on baking zillions of cakes for Sara's wedding had distracted me from normal cooking. I started the dough yesterday and shaped, boiled and baked this morning. As we had fresh bagels for lunch, and Rod slid his lightly toasted bagel onto his bagel cooler, I thought this nifty little device needed a write up of its own.
I bake bagels with urid lentil and tapioca flours. They take longer than wheat bread to toast and a lot longer to cool down - there's a proper term for this but it escapes me just at the moment. Rod used to slip the cut and toasted bagels into the freezer to speed this up. Now he slides the bagel onto the cooler he made from a piece of hardwood and a bent bit of metal. It holds the bagels perfectly while they are cooling and it looks beautiful as well.
I have never seen such a device elsewhere, the closest being the pole that the Scandinavians cool their crispbreads on. Easy to make I expect if you know how to make a hole in a bit of wood and bend a bit of metal. Harder to make it look elegant I suspect.
Posted by Lois Parker at 14:47