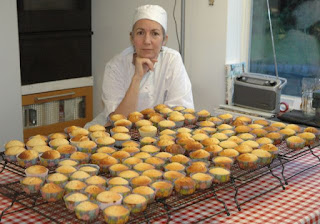 Here is a table full of cupcakes. There are 128 cupcakes and we ate one just to be sure they tasted ok. I made the first ones a little smaller as I figured people wouldn’t really want to eat much very much, but when I slipped it into one of the cupcake wrappers (an scalloped ivory case) they didn’t come very high and I thought the flowers would be invisible. Since I spent about ten hours making the sugarpaste flowers I did want them to show whilst they were on display. I could have just relied on piling the icing high, but I don’t like thick icing myself so a bit more cake seemed appropriate.

You will notice that the cupcakes vary a lot in how brown they are. I have a very ancient oven, and even though it is a fan oven it is not very even. I think the cakes taste nice whether they are very pale or really quite brown so I don’t worry about it, and they will all look the same once the icing is on. A brown version of the cake was tested by the bride and groom when they sampled the giant cupcake they are using as the cutting cake, and the caramel flavour of the browned edge was considered to be a bonus. My view is, relax and enjoy as long as they are cooked through and don’t taste burnt.

The photo was taken in a hurry as I was interrupting the Grand Prix motor racing to get the photo taken with me in it. You might notice I look tired. I had a week teaching at Birmingham University, and even though I ate nothing that I hadn’t taken myself and washed my hands extremely frequently I still got glutened enough to give me sever gut ache just because people eat bread etc and then touch things like door handles. I survived a bread and pastry course run by Adrian Rabinovich (www.glutenfree4kids.com) yesterday by eating nothing and taking paracetemol and Immodium, but I haven’t had much sleep for two days and the black bags under the eyes are one of the first signs I get of having been contaminated.

I’ll now put these in the freezer as soon as they are cold. I’ll get them out on Friday morning and ice them. The icing is simple to do as I am just going to swirl it onto the cakes swiftly with a pallete knife, so there should be plenty of time before we leave for the evening family meal at the venue. I’ll make the giant cutting cupcake tomorrow.

I ran a test on the giant cupcake. I used a baking tin from Lakeland Ltd, which has a faceted base cake that mimics the indentations of a cupcake case, and a topper that has a high swirl to mimic that great glob of icing people pipe onto cupcakes. We thought the proportion of cake between the top and bottom wasn’t right although the tin looks as if it would be perfect. The base is shallower than it looks as the bottom of the tin is part way up which changes the proportions and makes the finished cake look top heavy. I am going to bake an additional lower tier by using the tin upside down and baking in the base.