Pleased to report that no ill-effects from eating at Wetherspoons
I tried writing text and taking a photo in other apps on this phone. I found blogger and even got into the correct part, but don't seem to be able to import either text or photos. Posting this anyways as part of my learning and will amend when I get to my computer.


I am about to eat at a Wetherspoon's cafe in Worcester.  We read that they provided gluten free meals, and even listed everything clearly on their menu.  I am a little surprised their roasted veg isn't gf, but even more surprised that the only fruit crumble they serve is gf, and isn't more expensive than the other deserts.
They also give information about how to eat vegan, vegetarian and low fat meals.
I ordered the curry, saying I needed people to not even touch my plate if they had been touching bread.  Rather than the usual blank look the waiter said he would make a note.  I asked about the poppadoms (you get offered more as a substitute for the nan), saying last time I ate these in a restaurant it turned out they had wheat in, and I was ill for four days.  He went and checked, coming back swiftly to say the packet said gluten free.  I did wonder if they would fry them in general purpose oil but they were grilled. 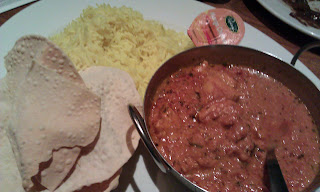 The meal was fine, your standard neutered English curry but with enough spice to be clearly a curry rather than a stew.
Tolerant Taster had steak pie and chips and beer, which he said was very good.
The staff were courteous, the meal prompt, and two full meals with a drink and one desert was only about fifteen pounds.
The crumble had an odd chewy, granular structure.  It was a substantial dessert, but neither the texture nor the flavour were particularly enticing.
Tolerant Taster’s view:
Looks the part and crumble is certainly the right word in that the topping has no coherence at all.  It simple falls apart as your spoon hits it.  It crumbles to a sort of granular structure with a particle size between 2 & 8mm.  Some particles are harder, slightly chewy, suggesting that they got a bit more sugar that glued them together.  A little too sweet, so that there is little contrast between the apple underneath and the topping. 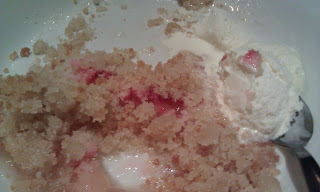 I now just have to wait and see if it is actually gluten free.  If is is it will make managing to feed myself when out in strange cities a lot easier. I would say full marks for making an effort.  The food reminded me of service station food from back in the days when I ate it…certainly a great improvement on having to go hungry or just eat the plain crisps.
Posted by Lois Parker at 17:17