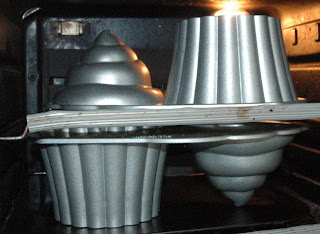 Today I have been working on the giant cupcake, which will be on a separate cake stand so that there is a cake for cutting. We tested the cupcake stand with a giant cupcake on top and it was unstable and would have been difficult to cut both because it was too high and also not strong enough – it would have been a shame to have the whole thing break and all the cakes tumble down just when they were trying to do their first symbolic joint task!

I greased and lined the cupcake tin as well as I could. I made the usual lower cake and also turned the tin upside down to use the hollow base. I cooked both of these together, but that was foolish as they have completely different volumes and it would have been better to cook them separately to reduce the risk of disturbing the bigger cake while taking the small one out of the oven. The upper- bottom and lower-bottom used a full double batch of mix, with enough for four cupcakes left over. The two sections also differ in diameter due to the thickness of the base, so I will need to use extra icing to build up the difference. 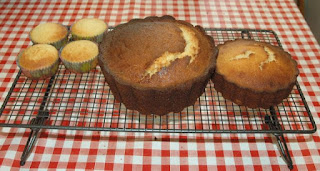 Today’s learning point is about melting butter. I had a tub of butter I had melted yesterday but then I ran out of energy to make more cake and kept it until today. I put it back in the microwave to re-melt, and after about twenty seconds I heard a loud thump as the lower part of the butter exploded past the upper layer which was still solid. When melting butter for the first time the task is very simple. If I was to re-melt butter in the future I would cut the top layer up into little bits and stir the two layers together. Fortunately the lid resting on the tub kept the butter in so I didn’t have a big mess to clean up, but I figured I might as well share this lesson to avoid others having the same problem.

We decided to make a larger cake for the giant cupcake to rest on, and after checking out various cake tins settled on a fifteen inch pizza tin I have used for lots of enormous celebration cakes. I put all the batter in this tin and smoothed it out. Unfortunately with the uneven temperature of the oven the cake has come out a bit irregular, so I am not sure quite how I will use it. It might be better to simply cover a cake board with fondant icing to give a base.

The important lesson for today is the same as one I mentioned earlier. I got interrupted several times while baking, and after I had filled the fifteen-inch tin I realised I hadn’t tasted the batter. I had left out the sugar, so I had to scrape the batter back into the bowl, add the sugar, and then reline another cake tin. If I had tested it before putting in the tin I could saved a tedious task – but at least that is better than waiting until people spit the cake out when they come to eat it!

I’ve got the swirly top in the oven at the moment. I filled the tin almost completely to ensure that I had a full width to match the base. It has risen a lot so I will cut off quite a bit, but we can always find use for spare bits of cake. So far it has had forty-five minutes at 160C and is still gooey in the middle. I reduced the temperature to try to stop the outside getting so brown. The double batch of mix filled this and made another nineteen cupcakes.

The oven beeped as I was writing this and the cake is still not cooked, so I have set the timer for another ten minutes and reduced the temperature to 130C. 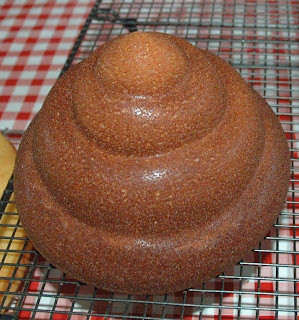 Finally it is done Amazingly it slipped easily out of the tin.

I measured the tin volumes (when it was too late to be useful) and found that they were approximately 1300ml for the proper base, 500ml for the upturned extra base, and 900ml for the swirly top. It is hardly surprising they all take different times to cook.