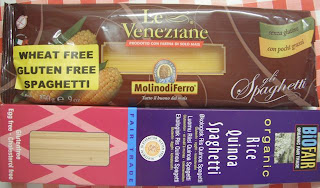 I made two types of spaghetti to test this evening. I had intended to test three, but the Tesco organic wasn’t available in the shop when I went yesterday (unless I am imagining I have had their spaghetti? I usually buy their penne etc as it works very well). I served both with a Bolognese sauce made with a tub of mince and mushrooms from the freezer and a jar of Seeds of Change tomato and chilli sauce. After baking so many fruit cakes yesterday I didn’t feel like cooking, and I am still struggling to tidy up after the focus on the step-daughter’s wedding last week. My sister, Joy, had complained that her gf spaghetti tended to stick even if she used a bit of oil when cooking, so, of course, I immediately had to set out to find her a suitable product.

The corn pasta is bright yellow. The quinoa and rice psta is a pale brown. 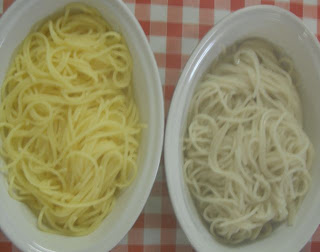 The dishes are a bit splattered - I mixed the pasta in a dish that was a bit too small for elegance. 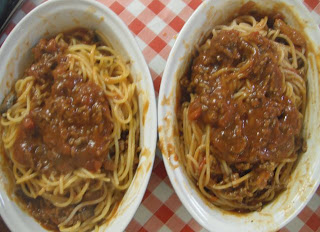 I know some of you out there can't eat quinoa, and some can't eat corn, but if you have a choice the comparison might be useful.

I followed the instructions for cooking on both packets. The quinoa one said cook for thirteen minutes, the other one three minutes stirring occasionally in an open pan then five minutes with lid on (though it did say turn off the heat and I forgot to). Both were mixed with same sauce and served from the same type of bowl.

Views of Mr Taster, who tolerantly coped with two plates of food and quizzing…

Considering he usually doesn’t like to eat quinoa products in any form I thought this was remarkably positive.

I thought that the corn spaghetti was considerably more bouncy. It didn’t seem to change in texture as the meal progressed, and I could still hold strands from high without any breakage fifteen minutes after the sauce went on. I liked the flavour of both though they were a little different. 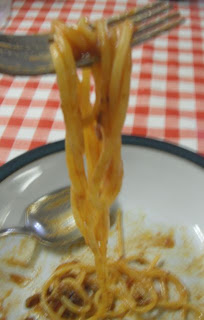 The quinoa one definitely had an extra flavour level that seemed less usual for a Bolognese type dish, but it was very mild and you would probably have to be looking for it to notice.

I liked both, but the quinoa one was definitely getting mushier as the meal went on. I will check them later this evening both cold and reheated and give another view.

Preliminary test suggests that the corn retains its shape better and doesn’t stick together at all. This was the complaint I had had about other gf pasta.