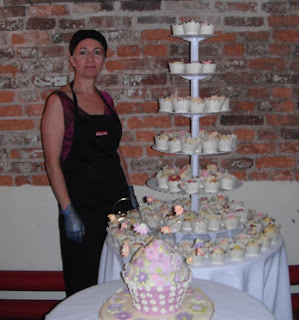 The ceremony itself was lovely, lots of photographs were taken, and I swanned around in my posh frock and hat. I congratulated the celebrant and he sneaked a kiss, saying not to tell anyone (he was a charming man in his sixties). Lots of milling about and being gently but firmly bossed about by the official photographers.

I checked the photographer’s list and as soon as I wasn’t needed any more I nipped off to check on the progress of the cake. By this time the meal was due in about half an hour. I got to the room and there was no cake to be seen anywhere. There wasn’t even a table for it. I chivvied, I put on my apron and hat and catering gloves so that my determination to get going was unmistakable, and shortly a small round table was produced and the cupcakes arrived from the cool room.

The cupcake stand? No one knew anything about the stand – a large stand given to me by Tami, Sara’s elder sister, several years ago before cupcakes became fashionable. When this did come I had to assemble it and then hurriedly start putting cupcakes into the cases.

The cutting cake hadn’t arrived and there would be no room on the table for it. Another table was produced and then the giant cupcake. I still had to do the flower topper, and I had intended to leave the fondant I put into the flower pick to set for half an hour before I inserted the wires, but there wasn’t any time. I bent over the ends of the wires so that they wouldn't flop so far in the soft fondant - a little less drama and more predictability. 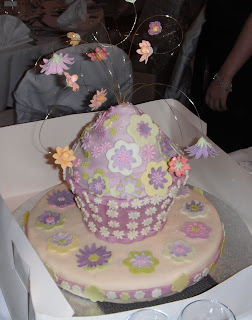 I was wondering how to get help and not lose time when Tami and Rod turned up and set to putting cupcakes into cases and filling the stand. 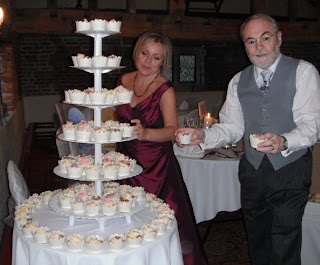 We got it all done with about five minutes to spare. I then turned myself back into step-mother of the bride. 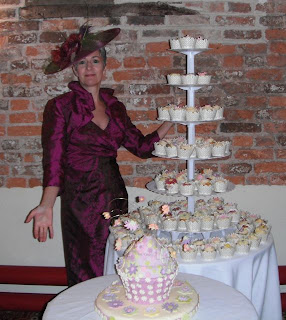